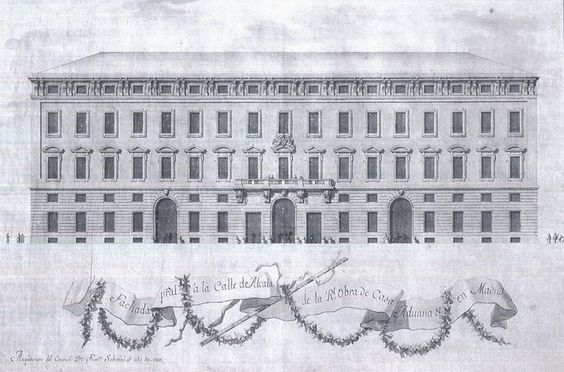 As I had previously commented in a prior article published in this blog, Charles III was the Viceroy of Naples and Sicily before the deaths of his older brothers Louis and Ferdinand (both left no heirs to the throne) and his father, King Philip V. Upon his father’s death, Charles returns to Spain in 1759 to now reign as Charles III. His stay and his reign as a Viceroy in Naples and Sicily bring him into contact with Francesco Sabatini, a Sicilian architect from Palermo. The two men will forge a solid professional relationship between them. This relationship will continue and become even stronger when Charles summons Sabatini to Spain in 1760 and makes him the most important architect in the Spanish court. The king names Sabatini as Great Master of Royal Works, Lieutenant Colonel of the Engineer Corps and Honorary Academician of the Real Academia de Bellas Artes de San Fernando. It was, without a shadow of a doubt, a fruitful and close relationship which brought further success to Sabatini. He was promoted to Lieutenant General and appointed Knight of the Order of Santiago and Gentleman of the Royal Chamber. The latter of these distinctions would bring him into the innermost  sphere of the royal circle.

The importance and influence of the works of Francesco Sabatini during the reign of Charles III was such that the next blog articles will focus on the legacy that his architecture has left on 18th century Madrid.